July 24, 2020
The story that started with: “There’s got to be a better way to water hanging baskets”.

Control Dekk, a greenhouse automation company based in western Michigan, celebrates seven years of their OASIS system, which is their innovative hanging basket irrigation technology. What started in 2013 with the simple statement – “There’s got to be a better way to water hanging baskets” – has since grown into proven technology that’s revolutionizing the way modern and conscientious greenhouses grow and water hanging baskets. 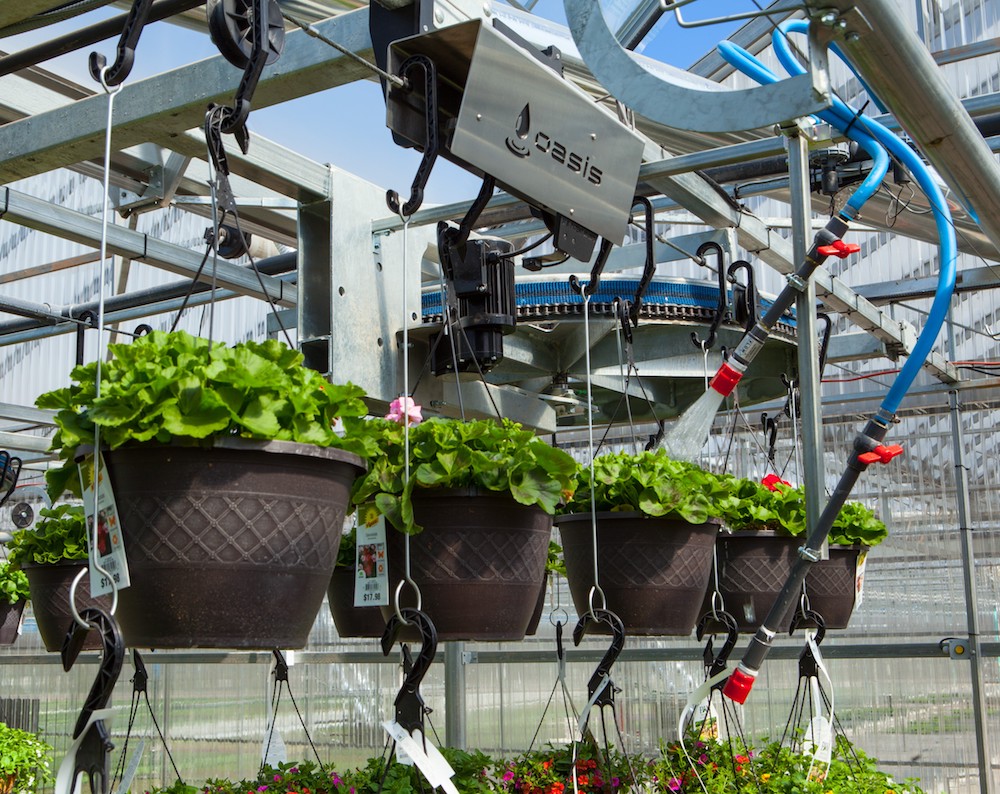 Proven Technology
“We’ve had people come to us from all perspectives – from the excited early adopters to the ones who really vetted us to the ones who stood back waiting for OASIS to prove itself,” shares Len Logsdon, Control Dekk’s Greenhouse Automation Engineer. “Across the board, though, we’ve been able to help all kinds of businesses and growers use OASIS to their advantage and to see for themselves what a gamechanger the OASIS system is. That’s what keeps us excited and committed to producing a product that takes hanging basket irrigation to the next level.”

Simple and Effective
The OASIS system operates on the simple premise of watering hanging baskets by weight rather than by time. Traditional systems involving countless tabs and switches, watering by time, and resulting in uneven crops and wasted water can cause growers more time and more headaches. The OASIS system is changing that by watering baskets to growers’ ideal basket weight with one module that’s easily installed on new or existing Echo, Boomerang, or FormFlex lines. The simplicity of the system along with its efficacy has growers not just excited but eager to implement OASIS as much as they can.

Brad Wolf, CEO and grower at Green Valley Greenhouse in Minnesota, says, “We gave OASIS a try on four lines and then did an entire new addition with it. Once we saw how the system worked in a broad capacity and how we could set it up the way we wanted it, we really started seeing the return on investment. Two years after starting with those first four lines, we’re up to 86 lines on OASIS, and we’re not going to stop there.”

Growing Strong
The OASIS system has gone from watering baskets in a handful of greenhouses in Michigan during its prototype phase to watering over 1 million hanging baskets in 2019 alone. The growth hasn’t stopped there. Greenhouses across the United States and now even in Canada are catching wind of the irrigation technology that delivers on being simple, straightforward, and impressively accurate.

Control Dekk was founded in 2013 by brothers and growers Jordan and Jared Dekker along with Len Logsdon, a controls engineer with decades of experience in developing and troubleshooting automation technologies. Utilizing Len’s experience and knowledge, the OASIS system was developed to help save growers time and stress and to produce more consistent quality hanging basket crops.

The 3D booth of Control Dekk at Cultivate’20 Virtual

"The OASIS system is the best by far; it’s flawless."
- Jake Tebos, Grower | Tebos Greenhouses Inc.
“There is water savings, but it’s more that we’re doing the right thing for the environment and for our crops.”
- Hugh Kurtz Jr., Owner/Head Grower | Kurtz Farms
"After a trial of one OASIS at the end of our 2016 season, we installed OASIS on all Echos and Boomerangs in our facility. Now I can't imagine growing without it."
- Jason DeGroot, Owner/Head Grower | Bloemenberg Growers Inc.
“The accessibility of the people at OASIS and the user friendliness of the interface are the two key points for me.”
- Zach Smith, Operations Manager | Hood’s Gardens
"OASIS basket watering systems are worth the investment to ensure product quality, productivity, and reduced stress in my life."
- Dale Buist, Owner | Countryside Greenhouse
"We're extremely happy with the OASIS watering system! It takes the guessing out of watering -- simple and accurate."
- Barry Stiffler, Owner | Barry's Ground Cover
"OASIS by Control Dekk really helped our crop quality by attaining an equal target weight after baskets were hung."
- Kevin van Wingerden, Grower | Pacific Growers
"IT REALLY WORKS!"
- Andy Buist, Owner/Head Grower | Micandy Gardens
"The baskets using OASIS are absolutely beautiful and noticeably stunning. You'll see a noticeable difference in your crop guaranteed."
- Zach Smith, Operations Manager | Hood's Gardens
"Quality has improved for baskets as well as for our floor crops underneath -- I am really enjoying this system!"
- Evan Schnabel, Head Grower | Hood's Gardens

LET US CREATE A CUSTOM AUTOMATED WATERING SOLUTION FOR YOUR GREENHOUSE

While we can’t be all things to all people, we’re committed to making our system work for you and providing top-notch customer service along the way.

Get a Custom Quote